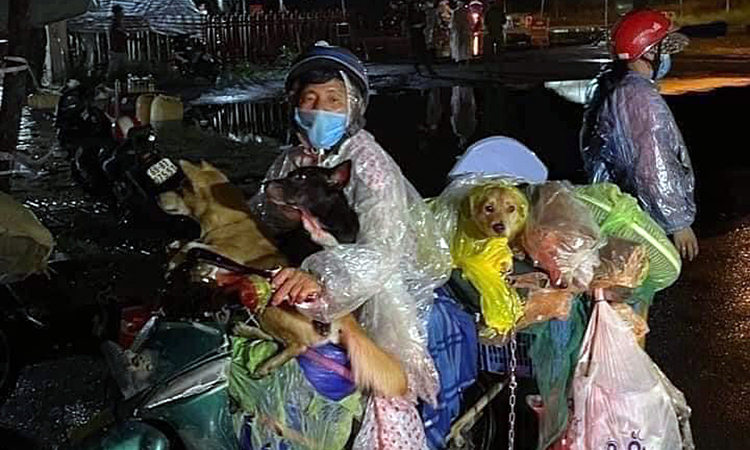 Pham Minh Hung, 49, confirmed Sunday that 13 of his dogs were “destroyed” by the Covid-19 prevention force in Khanh Hung Commune, Van Thoi District, Ca Mau Province two days ago. Three other dogs and a cat traveling with his relatives’ family faced the same fate.

Hung, a native of Binh Duong Province was working as a bricklayer in Long An. Over the last few months, the pandemic has taken to his livelihood away, making life difficult. On Oct. 8, he drove his wife and the dogs on his motorbike, following his wife’s sister-in-law and her family to their hometown in Khanh Hung Commune.

At a checkpoint as they entered Ca Mau, Hung gave a person two puppies, and continued his trip with four dogs and nine puppies. When the two families (four adults, one child) reached Khanh Hung Commune, local authorities took them to a quarantine facility. Rapid antigen tests showed all five were positive with the coronavirus. They were transferred to the Tran Van Thoi General Hospital for treatment.

Their dogs and cats were destroyed by the pandemic prevention force afterward. When the incident was posted on social media, it attracted public outrage with many people saying such an extreme measure was not necessary to prevent the spread of the virus.

On Oct.10, Tran Tan Cong, Chairman of the Tran Van Thoi District People’s Committee, confirmed that incident had occurred in Khanh Hung Commune’s quarantine zone. The district has asked local authorities for a report and explanation, he said.

“As per initial information, these two families returned to the quarantine facility with more than a dozen dogs and cats, of which one tested positive for an unknown virus. We are waiting for specific reports,” said Cong.

Given that both people and animals were infected, the task force “discussed (the issue) with the owners and got their consent (for the animals to be killed).”

Nguyen Duc Thanh, Office Chief of the Ca Mau People’s Committee, said he has assigned a specialized agency to coordinate with the local authorities to review and analyze issues related to the killing of dogs and cats, and suggest solutions.

Ca Mau is one of the Mekong Delta localities that have received a large number of people returning to their hometowns recently. From Oct.1 to 6, nearly 20,000 people returned from other provinces and cities, leading to an overload of the province’s quarantine facilities. The province has extended its social distancing campaign, which was scheduled to be eased, starting Oct. 4.