Dairy cow diets contain nitrogen, mostly in the form of protein. However, nitrogen-use-efficiency by dairy cows is low, with only approximately 30% of nitrogen that is consumed being converted into milk protein. Much of the remaining nitrogen is excreted in manure, and this has a number of implications:

Recognising these challenges, DAERA, supported by co-funding from John Thompsons and Son Ltd and Trouw Nutrition Ltd, have commissioned AFBI to conduct a wide ranging research programme which is designed to identify strategies to improve nitrogen-use-efficiency in dairy cows.

Work which will be undertaken within this research partnership includes reviewing existing scientific literature to identify the following: relationships between dietary protein and ammonia excretion from manures, recent research on protein feeding, protein feeding systems adopted in Europe, and approaches to assess the protein status of cows based on the analysis of milk, blood and manure.

In addition, the research will encompass an extensive data modelling exercise to examine drivers of nitrogen-use-efficiency in dairy cows, with this work involving data collected from approximately 40 studies conducted at AFBI over the last 25 years. The project will also involve a series of full lactation studies in which the direct effect of protein nutrition on cow performance will be monitored.

These studies will also examine the effects of diet on milk and blood urea levels, ration digestibility, and the rumen microbiome (the latter in partnership with QUB), and will seek to identify alternative approaches, such as the use of mid-infrared (MIR) analysis of milk to predict nitrogen-use-efficiency. The economics of adopting lower protein diets will also be examined.

There is currently considerable pressure, which will continue to increase, for the dairy sector to improve the efficiency with which dairy cows utilise dietary nitrogen. This major project, through the adoption of a holistic research approach, has potential to help improve nitrogen-use-efficiency within the local dairy sector, and to ultimately reduce nitrogen losses to the environment. What are the Growth Drivers of Essential Oils In Animal Nutrition Market by 2027 with Key Players DuPont, Cargill, Delacon Biotechnik, Bordas Chinchurreta Distillations 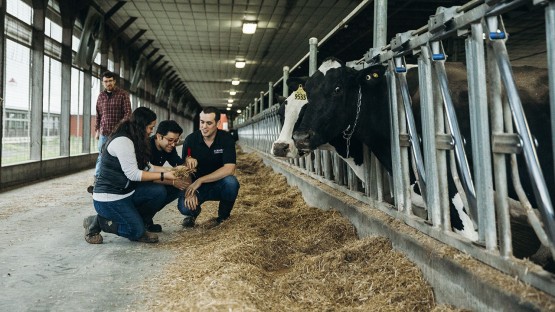