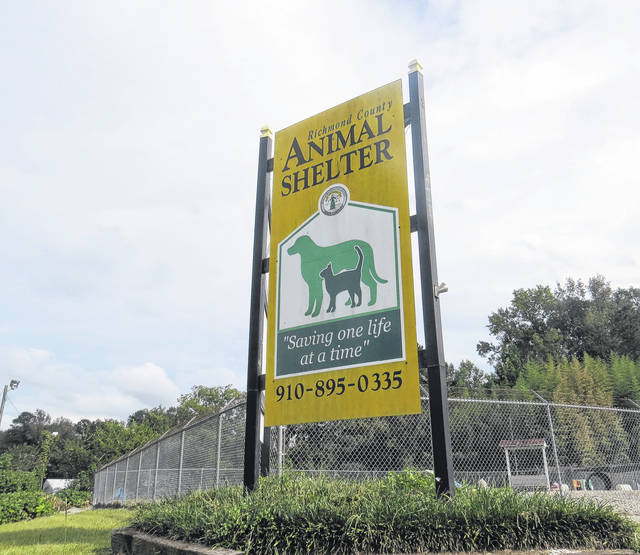 ROCKINGHAM — The Richmond County Animal Shelter has received a positive report on its annual inspection by the North Carolina Department of Agriculture, and this week held its first training session for shelter staff planned following the shelter’s most recent penalty.

There were only three areas marked “needs improvement,” and other comments that didn’t accompany this mark on the shelter’s performance in the related section. The areas that needed improvement, according to Garner, were relating to the state’s requirement that all surfaces animals come in contact with be impervious to moisture, that all resting surfaces be made of non-porous or material that can be easily cleaned or disposed of, and the replacing of damaged receptacles.

The mark for replacing damaged receptacles referred to chewing damage seen on several stainless steel bowls. For the mark relating to the animals’ contact with moisture, Garner noted that some outdoor drop off pens were seen with some chipping and damaged sealant to the cinder block walls, and require resealing. And for the mark on resting surfaces, there was damage to resting surfaces include chewing and scratching damage on the dog decks and cat cots.

Garner noted that she reviewed the intake, vaccination, and medical treatment records for all in-house animals as well as adoptions and did not find any inadequacies. The only other comment included by Garner referred to torn or damaged shade clothes which were being replaced while she was conducting her inspection.

As of the day of inspection, there were 59 dogs on the premises, and 10 cats. Garner said there were 41 protective/custody/bite hold adult dogs and puppies and that she and Director Bonnie Wilde discussed long-term care options for these dogs.

“Housing areas are clean and odor free at time of inspection,” Garner wrote.

The shelter’s previous inspection was conducted on June 6, 2020, and found no areas in need of improvement, only noting a rusted and broken pole in an outdoor enclosure, which Wilde addressed while the inspection was being conducted.

“We received high marks and a stellar report from the Agency,” said County Manager Bryan Land in an email. “Hats off to all of our shelter staff for a job well done and a positive state inspection!”

The first of likely more training for shelter staff was held on Tuesday and focused largely on assessing animals when they arrive, which involves establishing more efficient sharing of information between animal control officers and shelter staff as well as reviewing signs to look for when evaluating an animal’s health needs.

The participants included two animal control officers, an officer from the Hamlet Police Department, Wilde, and three key shelter staff designees who assist Wilde, according to Jimmy Quick, who is providing administrative support to the shelter on behalf of Land. The training was conducted by Dr. Patricia Norris, director of the DOA’s Animal Welfare Section, who offered examples from past cases she’s seen in her research, directed them to state resources, and outlined what the state expects in terms of shelter operations.

Quick said they were taking the existing policies and procedures of the shelter and giving them another look to find areas of improvement. The goal is to treat the animals like people being brought into a hospital, with animal control acting as EMS: able to take information about the animal’s condition when they are found and share it with the shelter so that they can mobilize their resources, according to Quick.

But, Quick said that Norris noted that shelter staff “are not veterinarians and we (the DOA) don’t expect you to be.” So Norris offered them “common sense assessments” that will help them determine the “next best course of action” to help the animals.

Norris lead participants through a demonstration of assessing animals’ anatomy “from nose to tail” to determine its needs. Quick said the training resulted in a hard copy of new guidelines that will be added into the existing standard policy of the shelter, though not all of the information was new to the trainees.

When Norris has conducted trainings like this for other counties in the past, they have required as much as 36 sessions, but Quick said the county will seek to get that same kind of assistance, though they will try to do it faster.

Quick said the county is “fully committed” to taking advantage of these trainings in an effort to identify “blind spots” staff may have.

The training was called for by Board of Commissioners Chair Jeff Smart following the shelter being penalized $2,250 by the DOA in January for it’s role in allowing an dog that had suffered “paralyzing” injuries to go 30 days without pain medication despite a veterinarians recommendation that the dog be euthanized. The dog, Princess, which has since undergone surgery and recovered, was picked up by an animal control officer in summer 2020 after apparently being hit by a car, then was in the care of the shelter, the the Humane Society of Richmond County, and the dog’s owner.

The Humane Society took the dog to the vet after the shelter received it, but returned the dog to the shelter without communicating the veterinarian’s recommendation, according to the DOA’s notice of the penalty. Quick said at the time that, while the dog was in the care of the shelter, the dog made no “outward expression of pain” and that the staff’s actions were an effort to save the dog’s life. The county plans to appeal this penalty, but a DOA spokesperson said they have not yet received any communication from the county with regard to this appeal.

Quick believes that if the shelter had had this training prior to the incident with Princess, things would have been handled differently.

“To the extent that if we had this training in advance of Princess, would we have noticed (her health needs)? Yes I think we would,” Quick said in an interview.

To support the Richmond County Daily Journal, subscribe at https://www.yourdailyjournal.com/subscribe.