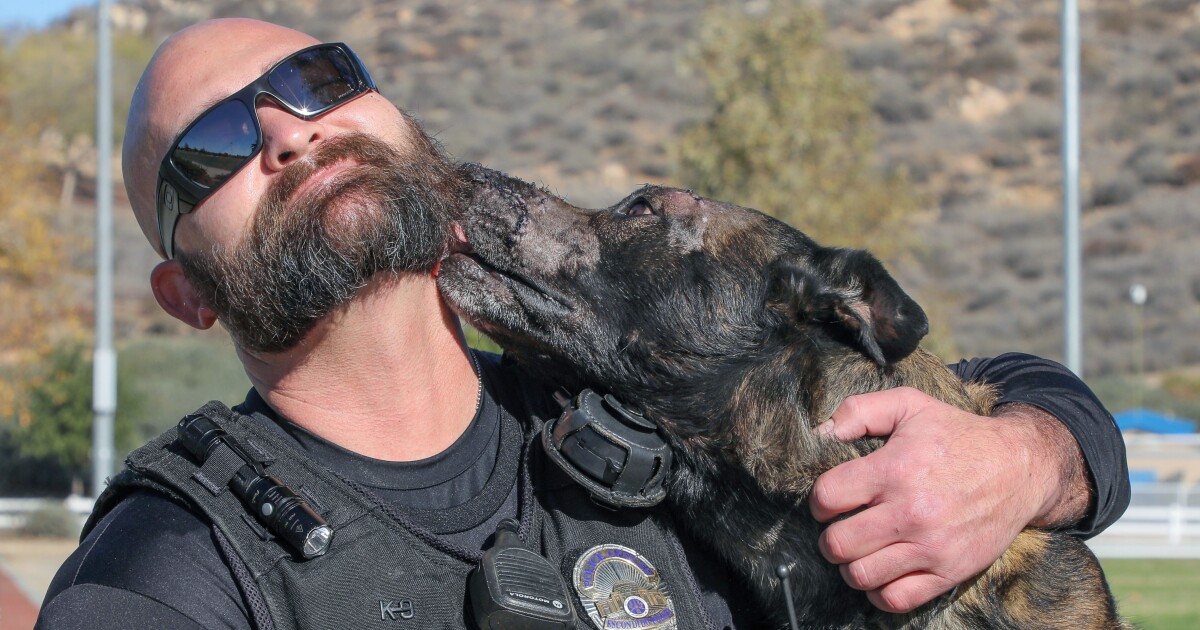 An Escondido police dog stabbed more than two dozen times after biting a fleeing suspect on the leg is slowly recovering from his injuries — but police officials are unclear whether he’ll ever be able to work again.

Aros, a 7 1/2-year-old Belgian Malinois, underwent treatment for his injuries and is recovering at his handler’s home after the Dec. 9 attack. Police said the dog was stabbed on his head and nose by a landlord who was being sought for allegedly stabbing and hitting a tenant with a baseball bat and stabbing the man in his stomach.

The suspect was spotted inside a two-car garage. He closed the garage door and refused to come out.

Police negotiated with the man for about 20 minutes, but he stopped responding to them, said police Lt. Mark Petersen. Officers entered the garage and the suspect continued to resist arrest, so Officer Chad Moore sent Aros after the man, who had begun climbing into the rafters.

The dog jumped up and latched onto the man’s leg — and that’s when he pulled out a knife and began to “hack away” at Aros’ snout, said Petersen, who oversees Escondido’s canine program.

“What was pretty amazing to me, and I’ve been involved with canines for 20 years, is the dog just held on. He did his job. He held onto the guy while being stabbed 27 times until the officers were able to get to him safely.”

Officers shot the suspect with a Taser, and he finally let go and fell from the rafters, dropping his knife, Petersen said.

Moore grabbed his injured, bleeding dog and rushed him to a veterinarian. The man was arrested.

After a couple of days, Aros seemed to start feeling better — so much so, he started to act “rambunctious” and get into things — and was starting to tear open some of his stitches, Petersen said.

Moore took the dog back to the veterinarian and was given medication to keep the dog more calm.

“They are upping his sedation meds,” Petersen said Thursday. “He’s not letting his face heal, (so) he’s back on heavy-duty meds.”

According to his veterinarian, Aros seems to be healing well and is expected to make a full recovery. But his future police career remains in question.

“We don’t know yet whether he will be able to return to service, because we don’t know how much damage was done to his snout. That’s his moneymaker — to be able to sniff stuff. It is just a waiting game at this point,” Petersen said.

Moore said the dog’s snout also has to be structurally strong enough to endure police work.

“They are resilient animals,” said Moore. “Look at Aros and what he went through. He still wants to go out. He still has his energy.”

A retired Escondido police officer has launched a GoFundMe campaign called “Help Aros Heal” to raise money to support the Escondido Police Department’s canine program. Damian Torres said donations would assist the department if it needs to replace Aros. The campaign had raised more than $5,300 by Friday evening.

“I have an affinity for working class dogs and as a citizen of Escondido felt compelled to help,” Torres wrote about the campaign in an email response to questions from the Union-Tribune. “I feel this gives those who donated a chance to act as stakeholders when they see a Police Service Dog, and knowing their contribution helped to add an additional dog and handler to protect their community.”

He said all donations will be given to the city of Escondido’s police K9 coordinator.

Aros has worked as a police dog for about 3 1/2 years and he’s one of six police dogs on the Escondido force. Each dog costs about $12,000, Petersen said.

This isn’t the first time the Escondido department has had a police dog injured in the line of duty. In 2001, a police dog named Zak was shot during a running gunbattle between police and a burglary suspect, who was shot and killed by officers. Zak recovered and was able to work on the force again.

“(Aros) could come back to work and that’s our goal,” Petersen said. “He still has some years of service ahead of him.” 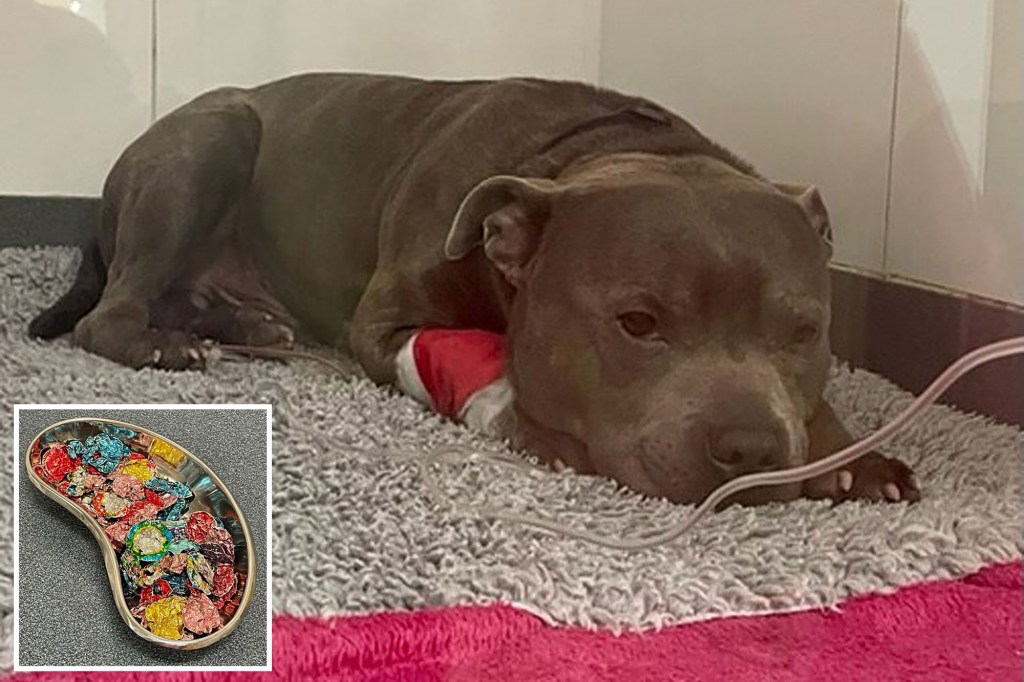 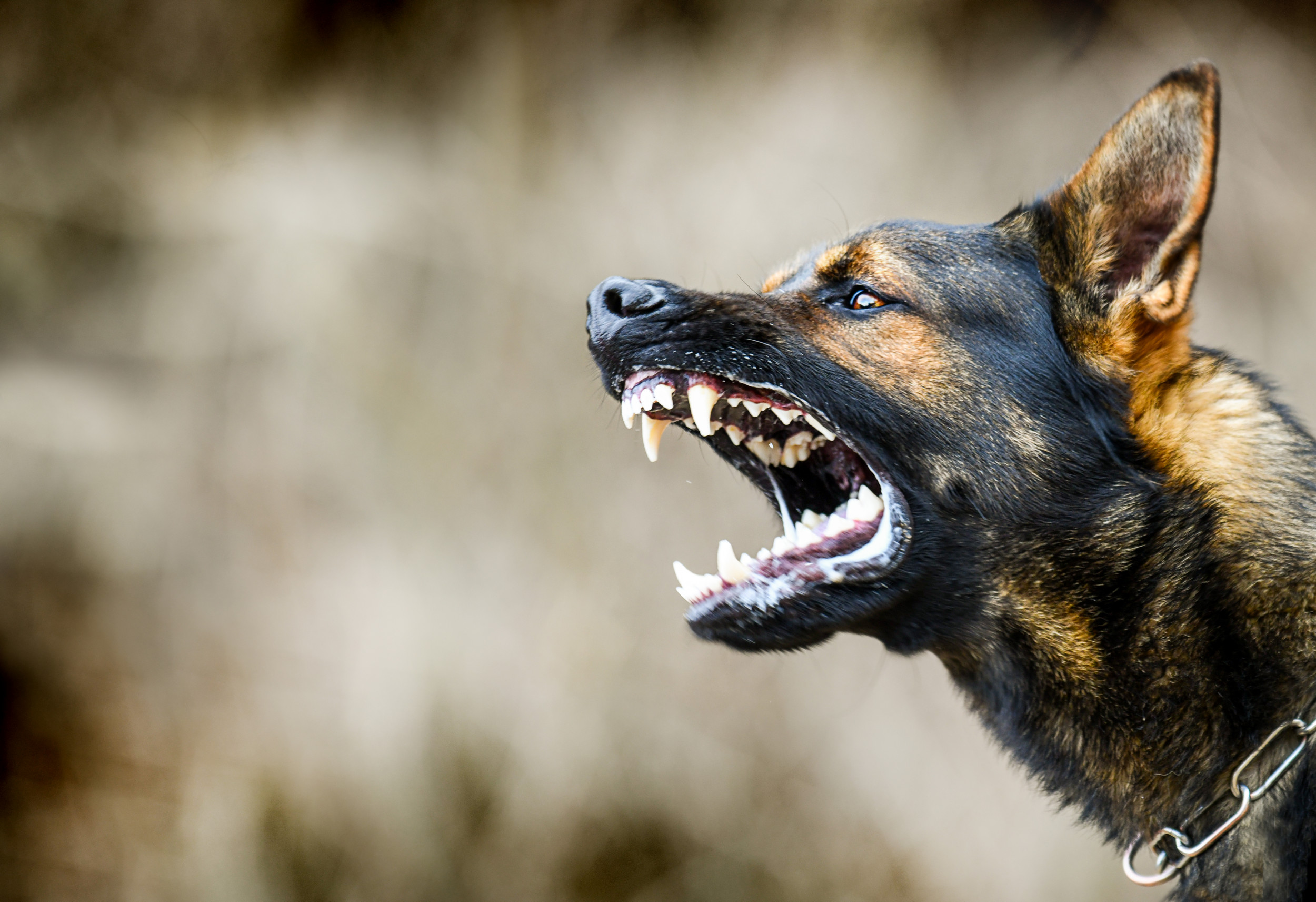