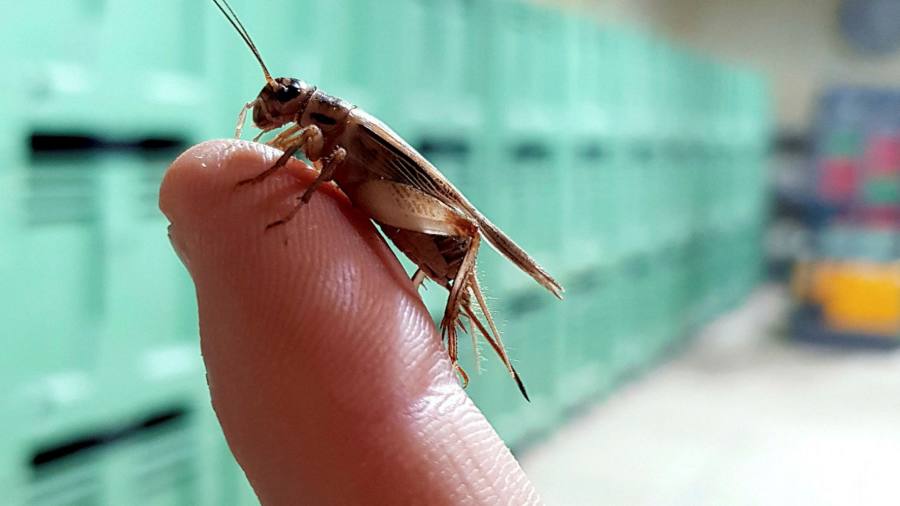 Harry Wright’s new range of smartly packaged seasonings looks like the sort of artisanal fare found at any foodie market or upmarket deli. But they have a distinctive ingredient: ground, roasted crickets.

“Once the crickets are in with the herbs and spices, you can’t taste, see or smell them,” Wright said, adding that “there is none of the ‘bush tucker trial’ vibe” — a reference to a hit reality TV show where contestants are made to eat the most unappealing of bugs.

Wright hopes his business, Short-Horn Super Seasonings, can help alter public attitudes towards the eating of insects, which proponents see as an inevitable solution to a looming global food crisis.

As fears mount over the environmental impact of the agricultural system, entrepreneurs are rushing to develop new ways to feed the planet’s growing population. Insects are rich in protein and other essential nutrients and can be reared at scale with minimal environmental impact.

The pace of early-stage investments has so far crawled behind that seen in the more glamorous corners of agritech, where start-ups making plant-based and lab-grown meat have attracted venture capital as well as public attention.

But the buzz around insects is growing. VC funding to the sector has been creeping up since 2018, with $210m in equity investments last year, according to data group Dealroom.

The largest flows have been to start-ups focused on feeding livestock, fish and pets.

InnovaFeed of France, which rears black soldier flies, raised $140m in its latest funding round. It has a strategic partnership with Cargill to supply fish and animal feed, and even processes the flies’ manure for use as a fertiliser.

Ynsect, another French business that grows molitor and buffalo beetle mealworms used in pet food, fish feed and fertiliser, last year announced a fundraising of more than $350m in equity and debt.

Insects can replace grains, soyabeans, fish and vegetable oils in the pellets fed to animals and fish, providing essential proteins and other nutrients. They can be reared on organic agricultural waste and minimal amounts of water.

Rising environmental concerns and ESG investments as well as recent regulatory approvals have opened the door to larger-scale funding.

But to become a human food source in western markets, insects need to overcome the “ick factor”.

Alex Frederick, agriculture and food analyst at corporate data provider PitchBook, said negative perceptions among consumers in markets that have not traditionally consumed insects were a big barrier to acceptance and growth.

Gorjan Nikolik, analyst at Rabobank, said that if the functional and health benefits of insects were clearly established, they could play “an important role in food”. However, the bank’s latest report on the sector solely focused on non-human consumption of insects. “We had a lot of our clients saying ‘I wouldn’t eat it’,” he explained.

Even though pet food is the largest market for insect protein, some manufacturers refuse to use insects. “Most people find insects disgusting and some don’t want their pets eating them,” said Nikolik.

But industry insiders believe insects will play a bigger role than some analysts predict.

“More people are starting to think about the consequences of their behaviour,” said Kees Aarts, founder and chief executive of Dutch insect group Protix. He added that someone talking about sustainability 20 years ago would have been regarded as an anti-capitalist but now “most young people are thinking about it — I’m just blown away how they are looking at every possible solution to help reduce their footprint”.

The adverse reaction to insects can be overcome, he believes — “if you deliver tasty products with a lower footprint then consumers will buy them”.

Some experts say we may have no choice but to eat insects given the risks climate change, soil erosion, pests and disease pose to the global agricultural system.

“Consumers in the so-called west will have to embrace insects into their diets, to ensure their nutrition remains rich with essential amino acids, proteins, and essential micronutrients such as iron and calcium,” said Asaf Tzachor, a research associate specialising in food security at the University of Cambridge.

The key may be, as with Short-Horn’s seasonings, to move away from eating whole insects towards using them as ingredients and additives.

Tzachor believes processed insects could be used in products such as pasta, porridge and pancakes to improve their nutritional profile or act as antioxidant and anti-inflammatory agents. “Pellets of black soldier fly contain proteins and calcium,” he said. “Powder of mealworm beetles contains zinc and essential fatty acids.”

Lower volumes of insect-based human food can be offset with higher value and margins, some executives and investors believe.

Eric Archambeau of venture capital firm Astanor, an investor in Ynsect, said insects were nutritious and the ease with which insect proteins can be digested meant they could be used in food aimed at elderly and infirm people who can struggle with mainstream products. With supplements a multibillion-dollar industry, he added, “these categories are a niche, but they are a very large niche”.

Aside from food and feed, researchers are experimenting with other ways of using insects. Some researchers are looking at using insects’ anti-bacterial properties to increase food products’ shelf life, while others are investigating their potential role in addressing environmental problems, for example by rearing them on waste such as cardboard and plastics.

While developing these technologies into scalable operations which will work commercially will take time, “it’s the potential that excites people,” said Nikolik.

The response to Short-Horn’s launch at the start of the year suggests perceptions are changing.

“We’ve already grown by 20 per cent and we’ve had repeat customers,” Wright said. “People have been really receptive which has been quite a shock.”