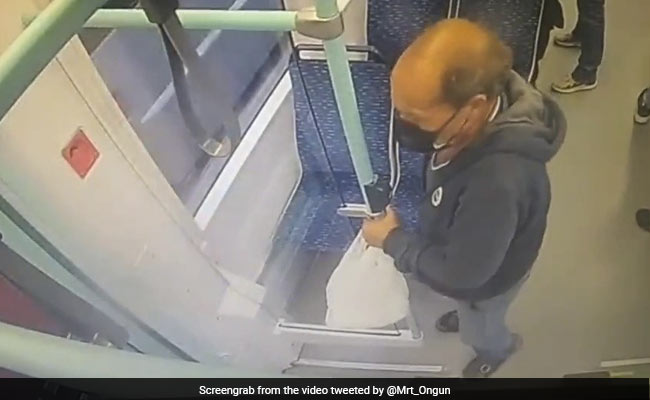 A man was filmed leaving dog poop on a train in an attempt to frame a stray dog.

When a local Istanbul canine was accused of pooping on the train, it became more than just a regular complaint. Boji the dog is a star in his own right, having won several hearts since he was spotted travelling by public transport across Istanbul, Turkey. He owes much of his fame to social media users and even has a dedicated Instagram account. However, this time, social media did not work in his favour. On November 19, Boji was accused of leaving faeces on a train seat.

According to a local news report, a person on Twitter wrote, “The Istanbul Metropolitan Municipality’s staff dog has dirtied the streetcar.” And, this didn’t go down well with users on the social media platform. Some said that “this dog has crossed the line”. However, a few could not believe the accusations and rooted for the dog.

Late on November 19, Boji’s instructor, Ali Yeşilırmak, denied the allegations through Boji’s Twitter account. The tweet read, “I was at the training centre all day. I did not even step out of the centre to travel in Istanbul. Somebody put the poop on the tram and tried to put the blame on me. Shame on you.”

Later, it was found that Boji’s claim was correct. The dog wasn’t the one to leave his faeces on the train. Surveillance cameras identified a man placing it on the seat. In the footage, we see a man aboard the train. He stands beside the gate and looks around for a while. Then, he takes the poop out and stealthily places it on the seat.

Murat Ongun, a municipality spokesperson, tweeted the footage and wrote, “It was alleged that Boji had pooped on the tram. But the cameras showed us these incredible images, watch it.”

The clip has garnered more than 14.8 million views, so far. Watch the video here:

Officials are looking for the man who framed Boji, the report added.

The Istanbul Metropolitan Municipality had sterilised Boji. The dog has a tracker attached to his collar that helps city authorities to keep an eye on his movement, reported CNN.

Ways to Instantly End Conversations with Other Dog Owners

Maine Game Warden and His Dog Find 2 Missing People in 3 Days: ‘We Are a Team’