A dog walker who tried to hurl her pet’s poo at a young boy and confiscated his bike after he built jumps at a park has been condemned on social media.

Video filmed in a park in Padbury in Perth’s northern suburbs showed the woman lunging at the boy with a poo bag after he appeared to call her an offensive racist term.

‘I beg your pardon you little s**t,’ the woman responded angrily in the clip, which has gone viral on TikTok.

‘You dumb f***ing b***h,’ the boy replied, before leading the furious dog walker on a chase through the suburban park.

The teenager shared video of the altercation on TikTok, before posting a photo of the woman – who he dubbed a ‘Karen’ – standing next to his bike.

‘Karen chased me and tried to put dog poo on my head for building jumps at a park – and then tried to take my bike,’ he wrote in the caption.

Most viewers sided with the boy and told him to report the woman to authorities.

‘I’m so sorry this happened. If I was there I would have helped you,’ one person wrote. ‘You need to show this to your parents and go to the police.’

‘Call the police and put an assault charge on her,’ another said.

Others though felt there must be more to the altercation than shown in the nine-second clip, and that something must have triggered her angry reaction. 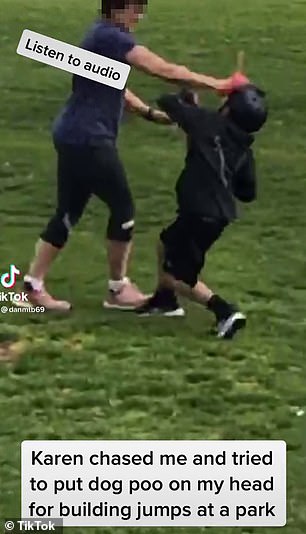 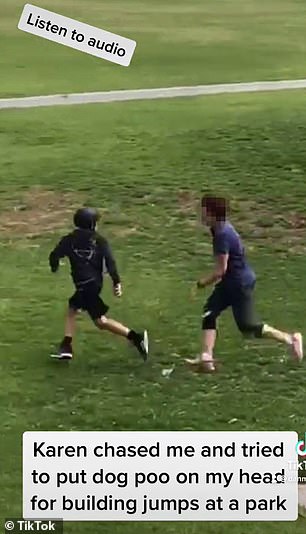 ‘How about you post the full video and show what happened prior to this so we get the full picture,’ one person wrote.

‘Why did she react this way? Still no excuse but would like to know,’ another said.

‘What happened before this video? Still no excuse for her reaction but she’s pissed at something,’ another added.