Whatever you do…don’t let your adult cat see this Pets column, especially if your cat is a chow hound and demanding about mealtime. Your cat will never forgive me.

College and Ontario Agricultural College have found that feeding cats one large meal a day may help control hunger better than feeding them several times a day. The research, published in the journal PLOS One, revealed that cats that ate one meal a day were more satisfied, which could result in less food-begging behavior.

The results also suggest cutting back feeding frequency could help reduce the risk of obesity by controlling cats’ appetite and potentially making them eat less, an important discovery given that obesity is the most common nutritional problem affecting cats. 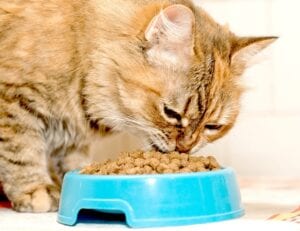 “These findings may surprise the veterinary community and many cat owners who have been told their animals need several small meals a day,” said study co-author Professor Adronie Verbrugghe, a veterinarian with Ontario Veterinary College’s Department of Clinical Studies, who specializes in companion animal nutrition. “But these results suggest there are benefits to this approach.”

Previous research has examined the effects of meal frequency on cat behavior, but this study is the first to use a comprehensive approach analyzing effects on appetite-suppressing hormones, physical activity, energy expenditure and use of energy sources, said co-author Prof. Kate Shoveller, an expert in animal nutrition with University of Guelph’s Department of Animal Biosciences “There was no good research to back up the several-meals-a-day approach that many owners hear, and so we wanted to put some real data behind current feeding recommendations to be sure they were right for cats,” she said.

The study involved eight healthy-weight, indoor cats under the age of five. Each cat was exposed to both feeding regimens and each for a total of three weeks, with the same diet and amount being offered in either one meal or four meals. Some of the cats were fed only in the morning, while the others were fed the same amount in four smaller meals.

The cats were equipped with activity monitors on harnesses to measure their voluntary physical activity. Food intake was recorded daily, and body weight was measured weekly. Researchers also measured cat metabolism through breath and blood.

Physical activity was higher in cats fed four times a day, but overall energy expenditure was similar between the groups. The weights of the cats in both groups did not change over the study period, no matter which feeding schedule they were on.

The cats that ate only one meal a day also had a larger increase in blood amino acids, meaning more protein was available to them to build muscle and other important proteins. This is important given that many cats lose muscle mass as they age, a condition known as “sarcopenia.”

“Physiologically, it makes sense that feeding only once a day would have benefits,” said Shoveller, “When you look at human research, there’s pretty consistent evidence that there are positive health outcomes with intermittent fasting and improved satiety.”

Even big cats in the wild engage in a form of intermittent fasting, the authors note, feasting when they make a kill and fasting before the next one. This seems to be evident in many National Geographic jungle films of hunts we watch.

While their data suggest feeding once a day may be a good way to promote feeling full and lean body mass, the researchers would like to do longer studies. Sticking in my two cents: a study recommending such sweeping changes in how often adult cats should be fed, certainly warrants a much bigger sample than just eight cats.

“This approach is really yet another tool in a veterinarian or a cat owner’s toolbox for managing a cat’s weight and keeping their animals healthy and happy,” said Verbrugghe. “But we always have to look at each individual animal and account for the cat’s and owner’s lifestyle. So although this approach might be helpful to promote satiety in some cats, it might not help another.” It seems cats seeking constant mealtime are not going to read this study and hold back.

Age and/or Health Make a Difference: Kittens need more meals each day than adult cats. Kittens require more food per pound of body weight to support their growth than do adult cats, and therefore should be fed more often throughout the day. “Growing kittens up to six months of age may require three meals a day,” says Francis Kallfelz, DVM, Ph.D., board certified by the American College of Veterinary Nutrition and James Law, professor of nutrition at Cornell University College of Veterinary Medicine. “From age six months to maturity, most cats will do well when fed two times a day.”

Senior cats, age seven and above, should maintain the same feeding regimen. “Once cats reach adulthood, once a day feeding is fine as long as they are healthy and have no disease problems suggesting a reason to feed differently,” says Dr. Kallfelz.

If your cat suffers from a health problem such as diabetes, you may need to feed him based on whenever he is administered insulin, depending on the type. “Talk to your veterinarian,” says Dr. Kallfelz. If your cat has hyperthyroidism, he may want to eat all the time. “Treat the disease,” says Dr. Kallfelz. “If it is a treatable problem, treat it and then feed your cat normally.”

Adoptable Cats at Babylon Animal Shelter (631-643-9270) 80 New Highway, N. Amityville: These feline friends won’t mind if you feed them once a day as long as you give them a loving home. Giuseppe #0-362 is an eight-month-old male kitten, while Sarah #0-408 is almost one year old.